The first time I saw Adelaide Labille-Guiard's painting "Self-Portrait with Two Pupils" at the Metropolitan Museum of Art in New York City,  I could not take my eyes off of it.   It was clearly a masterpiece that both challenged and invited me to investigate its contents.   I have since then learned much about Adelaide and her remarkable career in the arts during the tumultuous time of the French Revolution.

"Self-Portrait with Two Pupils" was exhibited in 1785 in the bi-annual Salon show of the French Royal Academy of Painting and Sculpture, the premier art establishment of the era, (participating artists were given the prestigious opportunity to exhibit in its members show held at Palace of the Louvre every two years). At the time, the Academy limited the number of women members to four.  The accepted four were -- Adelaide Labille-Guiard, Elisabeth Vigee-Lebrun, Anne Vallayer-Coster and Marie-Therese Reboul. 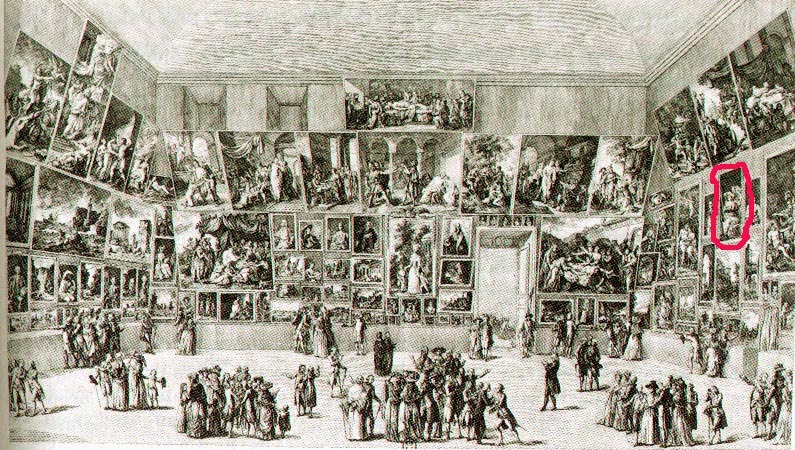 "View of the Salon of 1785" by Pietro Antonio Martini, Metropolitan Museum of Art
Above you can see, circled in red, where Adelaide's painting was hung.  Also shown in the same exhibition was Jacques-Louis David's "Oath of the Horatii"(center, second from top). The critics loved her "Self-Portrait with Two Pupils".  As a matter of fact, Adelaide's painting was so well received, that she was inspired to ask for lodging at the Louvre, a privilege that only male artists enjoyed.  She wanted to have her atelier at the great palace, where she could paint and teach. Her request was denied. It was argued, that since she was a teacher of young women, it was not a good idea to allow them in the same halls of the palace, where young male students studied with their mentors, this could possibly lead to indecent behavior at the Louvre.  In the end, she did not leave empty handed, Adelaide Labille-Guiard had the support and admiration of Madame Adelaide and her sister Victoire, Aunts of King Louis XVI , and she was awarded an annual pension of 1000 livres.

The provenance of "Self Portrait with Two Pupils"  is fascinating.  This painting remained in Adelaide's family for about 100 years.  It was offered to the Louvre in about 1878 and they refused it.  In 1905 it was sold to a collector and in 1953, it was gifted to the Metropolitan Museum of Art in New York City by Julia A. Berwind.   What a wonderful stroke of luck for the Met, to own such a masterful work of art!

Although Adelaide had strong ties to the women of the royal family and she was appointed "Pientre des Mesdames"--"Painter of the Princesses of France" she became a supporter of the French Revolution.  She painted 14 members of the National Assembly, including Maximilien Robespierre, one of the leaders of the French Revolution.    The times were changing and she became a leader and advocate for the future of women and their rights to exhibit in the Academy.  You might say, she was definitely a woman of strong character.  She was a dedicated teacher to female artists , inspiring them to pursue a career in the arts, no matter what the obstacles.

FAMILY  Youngest of eight children.  All her siblings died by the time she was a teenager.  Her father was a clothing merchant and had a boutique called "La Toilette".  Perhaps this explains Adelaide's keen eye for painting fabrics and textures.

OTHER INTERESTING FACTS:  Thomas Jefferson visited Guiard and paid her 240 livres
for a picture.

RECOMMENDED RESOURCE: A wonderful monograph on Adelaide:  "Adelaide Labille-Guiard : "Artist In The Age Of Revolution" written by Laura Auricchio.

I will end this post with a poem written by a critic
who saw Adelaide's "Self-Portrait with Two Pupils" on display circa 1785:

I have blown kisses to the two mischievous faces on

Which the eye deliciously rests, and to the mouth

Guyard! I must flee your eyes, I must...

Posted by Palettes and Pearls at 6:51 AM