Mystical and intriguing are words that come to mind when you first discover the paintings of surrealist painter Remedios Varo (1908-1963).  Varo's body of work can be described as a unique universe, that involves science, discovery and the human condition.   Remedios Varo was born in 1908 in Angles, Spain.  Her father, Don Rodrigo Varo y Zejalbo, was from the southern region of Spain, Andalusia, home of flamenco and Gypsies.  He was a man who had a great sense of humor and imagination.  Her mother was of Basque origin from the northern coast of Spain.  She is described as being good-hearted and devout catholic. The name Remedios means "remedy"which was given to her because she was the medicine her mother needed to heal from the loss of an older daughter.

Don Rodrigo Varo was a hydraulic engineer whose study of waterways took the family on many travels throughout Spain and North Africa.  Remedios saw and experienced many places abroad that impacted her later work.   One of her early pastimes was to copy her father's blueprints which helped develop her drawing skills at an early age.  Upon seeing her skill, Don Rodrigo taught her the use of the rule, carpenter's square and the triangle.  He made her correct her drawings until they were perfect, forming her habits of good artistic discipline.


After her early years of traveling, the family finally settled in Madrid,  in the old district, near the Plaza Mayor.  Here she attended a strict Catholic convent school, run by disciplinarian nuns.  She led a life of schedules and routines, which fostered rebellion in her character.  The writings of Jules Verne, Edgar Allan Poe and Alexandre Dumas became an escape for her.   She became fascinated with eastern stories and legends.  During this time, she tried to acquire a mandrake root, which was said to cry like a human when pulled from the ground.  Her active imagination created dreamlike images, that materialized later in her art.  One painting, that could be considered autobiographical from the years she spent in the convent, would be "Toward the Tower", 1961, an image that shows a nun on a bicycle, followed by a group of uniformed girls.

An early sketchbook of drawings, done by the age of 14, indicates that Remedios had ability for sensitive rendering.  Drawings she did of her grandmother, show that she could convey depth and expression.   Seeing her talent, her family sent her in 1924 to the Academia De San Fernando, the best art school in Madrid.   She passed the difficult test for admission, which involved charcoal drawings, plaster cast studies, a portfolio review, and presenting a self-portrait to an art jury. The committee approved her and thus began her rigorous academic training.  She crossed paths with Salvador Dali, who was a student during that time.  Surrealism became increasingly popular during this time period in Madrid.  This was the atmosphere that fostered Remedios Varo's tendencies toward the surreal to bloom.

In 1930 Remedios married Geraldo Lizzarraga, an artist friend from the Academia.  Lizzaraga was an award winning student.  He created portraits, political posters, films and also delved into commercial illustration.  Marriage offered Remedios independence, she was no longer under her parents strict control.  She and Lizzarraga were bohemian artists who created and studied art during a time of social change in Spain.  The times were changing and the Spanish revolution was planting its seeds.  In 1931 violence erupted on the street that housed the Academia. It is not surprising that when Varo  earned her degree, shortly thereafter she and Lizarraga left Spain for Paris.


Once in Paris, Remedios enrolled in the famous Parisian art school-- La Grande Chaumiere.  She soon realized that being in the confined atmosphere of a classroom was not her cup of tea, so she quickly dropped out.  She and Lizarraga lived a meager but bohemian lifestyle.  Somedays, their source of nourishment was no more than a cup of coffee.  They enjoyed the avant-garde atmosphere of Paris for a year before returning to Spain.  They decided that artistic Barcelona was far more appealing than Madrid, so they returned there instead.  Life in Barcelona was a time of change for Remedios.  Eventually she and Lizarraga parted ways (they remained friends throughout their whole life).   While in Barcelona she met the French poet and key figure of the French surrealist movement, Benjamin Peret.  He fell in love with Remedios and dedicated a book of poetry to her (They eventually married).  Peret returned to France in 1937 and Remedios followed him.  They settled in Paris and via Peret she became involved with the surrealist circle of French artists, which included the founder of surrealism, Andre Breton.

These years were a time of stylistic experimentation for Varo, she learned and absorbed the various techniques, images and philosophies employed by the surrealists in their art.  In her painting "The Souls of the Mountains"(1938), she experimented with fumage (a technique invented by artist Wolfgang Paalen, that involved passing a flame over a surface fresh with oil paint, resulting in marks made by the smoke on the wet surface).  She experimented with dripping wax in "Vegetal Puppets" (1938).  The surrealists embraced her and she was included in their international exhibitions and publications, dating from her arrival in Paris in 1937 and for many years after.


World War II was spreading and in 1939 the French government requested that all who could leave Paris, should. Hitler's troops were invading all parts of Europe and foreigners flooded into Paris.  Being a foreigner was becoming more and more dangerous by the day.  Identification cards had to be carried at all times by outsiders and any small misdemeanor, meant deportation to their native lands-- in Varo's case it would have been Spain, where Franco was dictator.   Peret, an outspoken communist was imprisoned for political activism.  In 1940 she was also arrested just for being Peret's companion.  She was released (it is speculated months after) and a friend, Georgette Dupin, took her in.....Dupin recalls how traumatizing an effect the imprisonment had on Varo.  Very soon after Varo's release the Nazis invaded Paris.  Very quickly Varo decided it was time to leave Paris and she migrated to the south to unoccupied territory.  She eventually made her way to Marseilles where she was joined several months later by Peret, who had been released from prison.   They found shelter in the Villa Air Bel, https://www.amazon.com/dp/B0010XS6IO/ref=dp-kindle-redirect?_encoding=UTF8&btkr=1#nav-subnav a chateau outside of the city, used by the  American organization called the Emergency Rescue Committee.  The mission of this privately funded committee was to rescue as many of Europe's leading intellectuals and artists, by assisting them to escape from France.  The committee worked for months in arranging and preparing all the necessary requirements to aid Varo and Peret to flee from France. Their plan was to migrate to Mexico, because America denied them entry due to Peret's political record.   Appeals were made to several sources in America to raise the money necessary for them to travel, including a plea to Peggy Guggenheim.  When the money was raised for them, their journey was secured from Casablanca to Mexico.  How they got to Casablanca from France was a mystery....They might have traveled in disguise among exiles on a French cargo vessel.

Mexico was an interesting place at this tumultuous point in history.  Many European  intellectuals and artists migrated there (more than 15,000 from Spain).   Here Varo and Peret found old friends, including Lenora Carrington, who became very close to Varo, and would become an important figure in Varo's life.  Mexican artists like Diego Rivera and Frida Kahlo, rejected this invasion of European artists, and felt fiercely patriotic to the traditions of Mexico and its artistic roots.  They did visit visit Kahlo's studio in Mexico, but they never found a friendly environment, so Varo and Peret remained apart and formed their own community with familiar faces from Europe.

They rented an apartment, full of character (it came with many roaming cats and birds in cages scattered along a patio) in the heart of old Mexico City.  Varo, alway made things interesting, even if she did not have the money for luxury, she filled her home with objects she assigned as talismans--like stones, shells, quartz , unusual pieces of wood (which she placed strategically in order to maximize their magic).   On the walls she tacked drawings by Picasso, Tanguy and Ernst, works Varo and Peret managed to sneak out of France.

Here she settled and focused her creativity on writing, which she always loved.  She and Lenora Carrington would meet on a daily basis and brainstorm dreams, stories and obsessions.  The two friends shared similar visions and points of view in their artistic sensibilities.  Varo did not paint much for herself during these years (1940s), she instead focused on commercial painting to pay the bills. She received work from Casa Bayer and did paintings for their pharmaceutical literature.  The paintings she did were very surreal compositions, like the one entitled "Insomnia" where sleepless eyes are hovering in the air, through a series of doorways and empty rooms.

As time passed Benjamin Peret and Remedios Varo grew increasingly apart.  In 1947 she and Benjamin Peret  officially ended their relationship.  Peret returned to France and Varo decided to travel to Venezuela, to visit her family.   She went with a new companion, Jean Nicolle, a charismatic pilot, who was 14 years her junior.  While in Venezuela, she worked doing technical drawings for the department of public health (in the malaria control division), her exact renderings of insects were to be used by students.  This detailed work, full of patterns and rich precision, was typical of Varo's mature work.   She remained in Venezuela for about two years before returning to Mexico.  The year was 1949, the year that marked the beginning of her "golden years", when she produced her masterworks.  Her personal life took a turn, she and Jean Nicolle parted ways and she met Walter Gruen, who was to become her second husband.  Gruen was an Austrian refugee, who had started his education in Europe to become a physician, but Hitler put an end to that, and he fled to Mexico.   He opened a very successful  music store in Mexico.  He believed in Varo completely, so he created the environment that she needed to completely devote herself to her work.  She started to exhibit her work in 1955 at a group exhibit at the Galeria Diana.  Her debut was so successful, that she was quickly invited to have a solo exhibition.  She was received enthusiastically by critics, collectors and fellow artists.  Varo even developed a waiting list, where she was paid before completing her paintings.  Her public acclaim resulted in Varo being included in most major exhibitions in Mexico.  Varo became famous for precise work that involved transformation, journeys and science.  These elements were reflections of her life story, which makes them all the more powerful.  In essence all the characters resemble Varo-- her paintings could be considered self-portraits.

The following are examples of some of her masterworks:


Remedios Varo died at the height of her career in 1963. There is something magical and unresistable about her work. 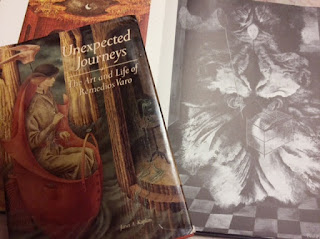 Posted by Palettes and Pearls at 8:06 PM